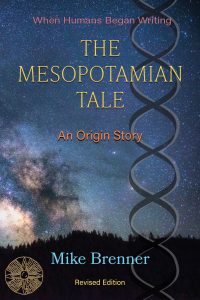 The Mesopotamian Tale, compact companion to Finding Our Long Way Home, contains the story that’s at the heart of that hefty book. The Tale, woven from texts and images unearthed from the ruins of ancient Mesopotamian cities (in present day Iraq), covers the age beginning with the remarkable events that led to the birth of our kind, and ending as the religion of the olden gods, civilization’s first faith, faded away.

The Tale boldly confronts the conventional view of the literature of the Mesopotamian peoples by taking their stories of their gods at face value, that is, by accepting that their deities were huge, powerful, flesh and blood humanoid beings who’d come to Earth…not characters in spun tales of anthropomorphized gods existing solely in human imagination.

The accounts assembled to form this narrative, when they were found, were spread over many thousands of artifacts. Piecing together texts separated from each other by time and distance and translated by a variety of scholars, was a process based in an intuitive feel for a vital narrative, one that had been obscured by the piecemeal nature of the source texts; by the dramatic, poetic style of those texts; and by the destructive effects of war and weather. The process involved as much art science. This author hopes, nevertheless, that in time experts will confirm that The Mesopotamian Tale has been accurately and truthfully abstracted from the vast findings. (Given the resistance inherent in orthodoxy, we can’t afford to wait for that confirmation.)

In Finding Our Long Way Home the Tale is explored at length, citing source material and relevant science. In contrast, this book’s commentary is relatively brief, aiming to show just one thing: how The Tale has the potential to lay bare the roots of humanity’s suffering in war, exploitation, autocracy, and slavery. This book doesn’t try to bolster the credibility of the narrative it presents. It doesn’t try to show how our troubled state would be relieved if we were to emerge from our mass amnesia with its help. Those tasks are ambitiously taken up in Finding Our Long Way Home.

In this work’s commentary two critical moments are brought into focus: when monotheism was rising to replace the worship of the gods; and the present, when we are making choices that will determine the fate of our species and our world.

On sale on Amazon now!

Subscribe here to get updates on the release and upcoming events.