"If you want to stretch your imagination and explore alternative origins for humanity, Mike Brenner’s book will help you out. Evolution Diverted is based on ancient Sumerian tablets telling of colonists from outer space who redirected our species’ evolution, not necessarily for the better...tales of invaders who, if they actually existed, left a legacy of trauma that is being played out before our eyes in civil wars, environmental destruction, aggressive devastation, and mass psychosis. Mike provides avenues of redemption for our fallen species, many of which make sense whether one accepts the alien hypothesis or not.

Perhaps those old Sumerians wrote their accounts just as present day men and women write tales of science fiction. This author, however, joins the company of Zecharia Sitchen, Christine Hardy, and other erudite scholars, who see the ancient accounts as more than metaphors.

Yet even as metaphor, Evolution Diverted reminds readers of humanity’s perilous status and of the steps that need to be taken to prevent the disaster currently envisioned in novels, films, comics and other mainstream media. Read this account with an open mind; you might accept its thesis, reject it, or remain agnostic, but you will not be bored!"

After reading Evolution Diverted, you will not see the world as you did before...or yourself, either. The book strips away much that is misguided, getting to the core of the human condition. Having known both Immanuel Velikovsky and Zecharia Sitchin, I am confident that if they were alive today, they’d be among the first to commend and endorse Mike Brenner’s work, since it confirms and magnifies the validity of their contributions. As a life-long student of Judaism, I admire the way Mike uses the Hebrew Bible as a lens with which, in one direction, we can appreciate the full reality of the Mesopotamians, and in the other, appreciate how the Jewish tradition developed out of Mesopotamian culture.

Author of While the Skies Were Falling: The Exodus and the Cosmos

"We find ourselves at a time when mainstream thinking is neither solving the problems we face nor containing the cascade of facts coming our way that clash violently with conventional belief. The question addressed by Mike Brenner is what could have caused our species to become so out of harmony with the natural world that, along with the many maladaptive behaviors we display, we are recklessly injuring and depleting our environment.

The answer, he contends, lies in our remarkable genesis, the story of which has been hidden in plain sight for over a century. It can be read in the most ancient of written records, the Sumerian clay tablets, tens of thousands of which are available in museums all over the world.

The first person to consider the elaborate stories on those tablets about the gods on Earth to be actual history and not fantasy was named Zecharia Sitchin. Mike has combined the initial insights of Sitchin with information from more recent studies and with his own understanding of psychopathology to come to a startling conclusion: that we are a species both amnestic and traumatized, and that recognizing the truth about our state is the first step toward transformation and entry into a larger world.

The narrative contained in the Mesopotamian tablets is that the species Homo sapiens is the product of genetic manipulation performed by beings from elsewhere who crafted us as slaves for their purposes. Those beings also determined the conditions of our early existence, circumstances that continue to haunt every one of us, in the form of shame and trauma passed down from generation to generation unto the present day.

The challenge presented to the reader by Evolution Diverted is to try on for size a new reality; to explore its implications and possibilities without a priori claiming it to have veracity; and to find out for oneself if accepting that our species’ original challenges are a factor in our personal difficulties can actually be of help in overcoming one’s own.

Given the chaotic state of our world, I believe that such an exploration is more than worthy of the reader’s investment.”

"I feel a lift as I journey with Mike’s ideas, feeling inspired by the hopes they unravel…hopes that resonate with my own desire for a world that works well for all human beings. Evolution Diverted gives us a fresh look in our “known” historical facts and resounds with a deeper and alternative truth to the global party line of human and planetary history. I appreciate that this book is grounded in psychology, spirituality, and science. It is an intriguing, fascinating, and absorbing work of scholarship on the one hand, and depth-interpretation on the other. A stirring is underway in human consciousness. Evolution Diverted can inspire and contribute to the various currents of our awakening." 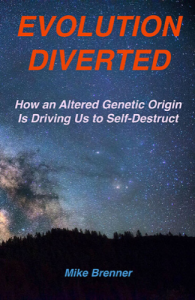